Cuisine from Around Thailand

Tweet
There's so much more than just pad thai! Anyone who's eaten in a Thai restaurant is at least passingly familiar with Central Thai food - pad thai, graphao, various curries - but Thailand is way bigger than that. Every region has its own signature dishes, which have all spread throughout Thailand over the past few decades. Here we'll take a brief look at the three big regional cuisines, Northern, Southern and Isaan (the northeast) and show you where you can get them in Chiang Mai - if you don't know what to look for you'll walk right by!

Isaan has historically had more in common with Laos than Thailand and it's reflected in their food - heavy on meat, chili and fermented fish, and like Northern food it's made to be eaten with sticky rice. Nowadays papaya salad and grilled chicken can be found on any street corner in Thailand, but for the more spectacular dishes you'll have to go to a genuine Isaan restaurant. Things to try are nam tok moo ("pork waterfall"), so called because the juice drips into the coals, and neua det diaow (sun-dried beef). Make sure to get a big plate of raw veggies too.

Som Tam Udon has a full variety of Isaan food, but their mix-n-match som tam menu blows everywhere else away. No English, but you can get away with pointing. 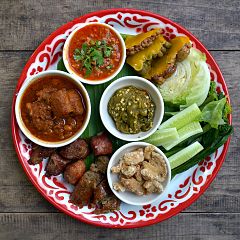 Khao Soy is the darling dish of Thailand's North, but it's actually a Burmese import not much like native food (in fact, most northern restaurants don't serve it). Northern Thai food never uses coconut milk, preferring thinner curries with lots of chilis and fresh herbs. Noodles take a back seat to sticky rice. Chili dips are a staple, including nam prik num (green chili) and nam prik ong (tomato and minced pork that's strangely close to bolognese sauce), paired with vegetables and pork rinds. Sai Ua, northern sausage, is packed with all manner of delicious spices. A word of warning, though - Northern food can get weird. Any restaurant worth its salt will serve frogs and ant-egg curry, and nicer ones might have placenta or cow udder soup.

Huen Phen is the most famous Northern restaurant in CM, smack in the middle of the old city. You won't find cow udders or anything too interesting, but the food is decent and it's very farang-friendly. Go for lunch - dinner is too crowded. 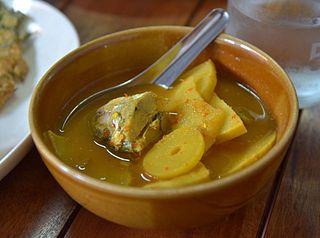 Southern Thai food usually takes a backseat to Central and Isaan food, but if you dig a bit you'll find that it has just as much to offer. Southern cuisine takes a lot of cues from its Muslim Malay and Indonesian neighbors to the south but remains distinctly Thai - properly made curries are much spicier than anywhere else (though Isaan's papaya salad comes close) and a lot of appropriated Muslim dishes have been adapted for pork. Dishes to try include Massaman curry, a thick Indian import, and gaeng lueang (yellow curry), usually made with fish and bamboo shoots and guaranteed to give you a kick in the pants. For a snack, pork satay is great - cooked in a sweet yellow gravy and served with peanut sauce and fresh cucumbers and shallots in vinegar.

Surprisingly, there's plenty of Southern food in Chiang Mai. Just look for the shadow puppet. Or, if you're lazy, Pak Tai Pattalung is awesome. Everything is laid out in trays with raw vegetables aplenty.

Of course, there's still Central Thai, Shan, Lao, Thai-Chinese and even hill tribe food to explore. We'll get to that later.